Speaking of Speaking Your Mind...

One of the things I love about blogging is the new people I meet, and the friendships I make. I can't tell you how much it enchants me to find so many kindred spirits. And like Anne of Green Gables (one of my all time literary bff's), I am continually surprised when I find yet another one. Surely there must be a limited number of kindred spirits out there for me, and I keep hoping I haven't reached the end of my amazing run of luck.

So anyway, Heidi is one of my recent kindred spirit discoveries. Yes I take all the credit. No you didn't find her first. 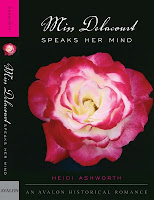 When I heard she was blog touring to promote her new book, I immediately asked her to come here. I am thrilled to promote Heidi. Oh, and her book, too!

(When she asked me if Tuesday would work, I had to laugh. "Ummm, let me look at my list of well written and pre-scheduled blog posts. (bwahaha!) Yeah, I think I can squeeze you in!)

I could go on and on, but today is the day I get to publish Heidi's post about her brand new book Miss Delacourt Speaks Her Mind! Read this, and if you'd like to read more about the talented Heidi Ashworth, here's a link to her blog, Dunhaven Place.


January 23, 2008 was the day I got “the call”, the day I found out that Avalon Books wanted to publish my book, and I was sick. With a virus. Again. My entire system was clogged up with all sorts of phlegm hanging out in my head, sinuses, ears, throat, not to mention my nose. In fact, a few days later would be “the day” (not to be confused with “the call”) I went through 3 boxes of Kleenex in a 24 hour period. My husband, who has a much better math brain than I, figured I needed to blow my nose every two minutes to use that much tissue. Considering I was asleep, off and on, for about a third of that time meant there were moments when the nose-blowing rate was much higher. I suppose that would be mostly because each and every blow was at least a two tissue job.

These were sad days indeed, but they were very much brightened by the news that I had sold my book. (Except for that awful 24 hours--even the achievement of a 30-some-odd-year desire wasn’t enough to banish my gloom.) The newsworthy point of this story, the part that someone other than myself might find interesting (though, there is a lot of wishful thinking in that statement, I must admit) was my state of total goofiness when the call finally came.

Imagine, if you will, a woman whose goal to publish a novel has been beating solidly in her heart since she was seven years old. A woman who knows this is really the one and only chance for this particular “baby” of hers to come to light without producing numerous copies of it on her printer and posting it off to many unsuspecting victims, giving the term “vanity printing” a whole new meaning. A woman who has been waiting for “the call” for nearly eight months after having sent in a requested revised version of her story (the operative word here being “requested”). A woman who is anxious to make a good impression on “her editor” but who currently has the voice of a longshoreman after a long night of drinking tequila out of a boot while standing on a dock in the pouring rain--while chain smoking.

Now, ordinarily, I don’t do any of those things. In fact, I have never done any of those things. It’s just that this awful sinus infection made me sound like, well, like I said. The funny thing is, just a few days previous, I was chatting with my good friend Shirley Marks (who has received five of these wonderful phone calls from Avalon Books) about how anxious I was getting and how I would really love to know if and when I was ever going to have my book published. That’s when she said “Don’t worry, ‘the call’ will come when you least suspect it”.

Now, I really couldn’t see how that could possibly be true. I had been expecting this call for a long time. I thought about it pretty much constantly—there was no way I was going to stop thinking about it, hoping for it, for even a split second. But, sure enough, when I picked up the phone that morning and croaked, “Hel . . lll . . .ooOOoooww?” the editor at Avalon was the furthest thought from my mind. So, when she said, “Hello, this is F---- B---- of Avalon Books,” I was so embarrassed that her first impression of moi had to have been that I was a chain-smoking late night boozer that I blurted out, “I’m sick! That’s why I sound like this!”

Oh, smooth! Here I am talking to an editor, something I have dreamed about doing my entire life, and that’s what I say!?!? So much for coming across as an intelligent, witty, educated person whose books you would wish to buy and publish into perpetuity. The rest of the conversation didn’t go much better and by the time I hung up I was sure she was regretting her decision to put me on the payroll. But, I am happy to say, it was too late for her to make that move. My book, Miss Delacourt Speaks Her Mind, lives.

Heidi's book Miss Delacourt Speaks Her Mind is available here.
Posted by Randi at 7:52 AM

I KNEW HER FIRST!! :) Glad you're part of the tour, Randi! This was an interesting read. Poor Heidi. And Lucky Heidi! Poor, lucky Heidi. Although there probably was very little luck involved!

Heather of the EO said...

You did a great job on the tour-

kindred spirits are the best. I wonder too if they'll ever run out. I hope not.

That is so cool Randi. Heidi is obviously well loved in here. Sounds like a great read.

How fun! What an exciting opportunity. I'm excited to "know" someone who knows her! Ha. What a great friend you are to help her promote her book. Looks like a great read!

I didn't know her first...but I'm glad to know her now and can't wait to read the book!

You rock Randi! Thank you so much for being a good kind kindred spirit and doing this for me!

I'm so happy to finally meet you justrandi. That chick on your side bar is freakin' cool. What a great idea. I've always loved your cute little pink profile chic pic and I really want it on my side bar, as I'm sure you really want a pic of a crash test dummy on your side bar. I will work on that.

btw, are you related to the funny farmer? Jus wondering because of the chick theme. Although your chick has love in it's heart and her chick has an oozie.

So my favorite part of that interview was all the nose blowing. Miss Heidi really knows how to blow her nose.

Can I be one of your kindred spirits?

All I ever get for speaking my mind is socially alienated!

That is so great--how fun for her. Will have to keep my eyes open for the book. Congratulations to Heidi.

Can't wait to get my copy!

And I so knew her firstity-first, so there!

That's what I thought at first, too. But Nope, I didn't. The actual winners are further down in the post.

But thanks for the congrats anyway. I'm going to transfer it to a congratulations on finishing my laundry. 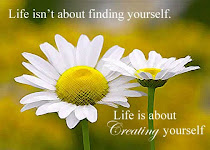 Randi
Colorado, United States
Hey, I'm not a writer or anything, I just play around here for fun. It's a good outlet for my bizarrity. Yes I make up words, and yes, I think we're all pretty bizarre. Some of us are just better at showing it.

Did you know that blog commenting is one of the 5 Love Languages? You didn't? Ok, well, that explains it.
It also elevates you from "creepy stalker" to "hey! a new friend!"

So even if it's your first time through, stop in and say "hey!"

I live for comments, and I read Every. Single. One. Even on older posts.

Need A Button For Your Blog?

My Posts With the Most Traffic

isitjustrandi at gmail dot com
(but it will work better if you use the symbols for @ and .) 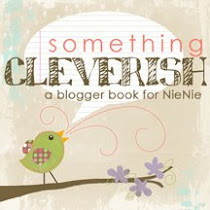 Believe it or not, they actually published one of my posts in a book! Click the pic to order!